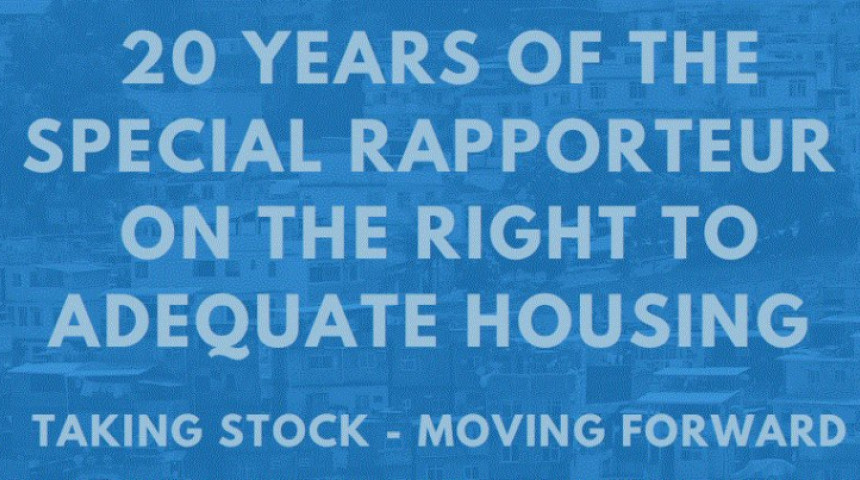 20 years after the creation of this figure, the current Special Rapporteur warns of the danger that the climate crisis and the commodification of land pose to this right

The availability of decent housing is considered a Human Right by the United Nations. In Spain, however, the Constitution places it as one of the principles that should govern policies. From the Observatori DESC we want to underline the central role that a person's access to a home in adequate conditions has for the achievement of a full life, therefore we believe that the content of the UN Special Rapporteur's report is relevant. In it, he urges member states to reconsider their legislative frameworks in order to give value to Economic, Social, and Cultural Rights (ESCR), which in recent decades have played a secondary role in governmental priorities compared to civil and political rights.

The document presented in the context of the COVID-19 pandemic shows how health solutions were linked to the issue of housing, given that one of the priority measures was the obligation for citizens to remain in their homes. This fact highlights the centrality of this issue and the urgency of responding to the serious violations that occur in it. The broad content of the United Nations' observation on the right to housing includes the fight against forced evictions, displacement due to dispossession or uselessness of land, and the achievement of a life in dignified conditions.

Poverty has shifted from rural areas and new phenomena of urban poverty have emerged, resulting in increased homelessness, segregation and substandard housing. In addition, armed conflicts continue to expel large masses of people from their territory, generating movements of displaced people and new settlements in precarious conditions.

To these problems must be added the insecurity caused by the COVID-19 pandemic, which has proved to be tremendously unequal in its devastation, affecting the most vulnerable populations with the least protection of their rights the most acutely. Access to safe and decent housing has been shown to be essential for protection against this virus, but it will also be essential in the face of possible future health threats.

From the outset, the report of the Rapporteur B. Rajagopal denounces how turning housing into a financial asset is a serious obstacle to guaranteeing the right to housing. The Special Rapporteur also insists on the need to define the conditions that housing must fulfil in order to be considered decent, stressing that this right cannot be considered to be fulfilled by providing people with a roof over their heads, but that the conditions that allow the person to fully develop the rest of the fundamental aspects of their lives must be guaranteed. For this reason, he insists, it is necessary to disassociate housing from its usefulness as a financial refuge and prioritise its role as a fundamental human right.

Seven challenges for the future

Most of the content of the report presented to the United Nations Human Rights Committee is a plea for the correct direction of the body's future actions. The Special Rapporteur highlights the work that has gone before, but warns that the schisms that lie ahead in the short term require immediate action.

He states emphatically that the greatest challenge of all that the United Nations society will have to face is the climate emergency, all other actions will have to be in line with the urgency of climate change. The Rapporteur calls for solutions to satisfy the Human Right to Adequate Housing that not only do not contribute to aggravating the climate situation, but also help to mitigate it, knowing at the same time that the housing sector plays a central role in the economic development model and involves a large consumption of materials.

The climate crisis is at the same time an aggravating factor of extremely serious problems such as the lack of land availability. The destruction of ecosystems and rising ocean levels will force millions of people to leave their homes. Real solutions to this fact require taking into account that a displaced person not only loses his or her home (roof), but is forced to abandon his or her livelihood, security and identity disruption.

In addition, land has been undergoing a process of control and capitalisation of its ownership that distances people from their ability to dispose of it. A situation of extremes has become widespread in which land ownership has been concentrated either in private elites or in monopolistic control by some states. In both situations, the rapporteur calls for both public and private actors to act in a way that detaches land from its role as a commodity. Balakrishnan Rajagopal is categorical when he states that access to land is an indispensable condition for achieving the human right to a dignified life and, therefore, to decent housing.

The report concludes by insisting on this role to be played by both the public and private sectors. It states that the speculative action of investment funds, among which Blackstone is mentioned, is having harmful consequences on access to housing. He indicated that a serious affordable housing crisis was occurring in many middle-income countries. In the context of growing urban poverty, rising housing and rental prices have led cities such as Berlin to push for a rent freeze.

In short, the report published by the United Nations is an endorsement of the struggle for the protection of Economic, Social and Cultural Rights through their housing dimension. The denunciation of speculation and commercialisation in matters related to the satisfaction of human rights is a constant and should serve as a guide for member states in the promotion of a legislative framework that guarantees them. The proposals of the United Nations Human Rights Committee should promote regulations that are more protective of people's quality of life than of the profits of large corporations.